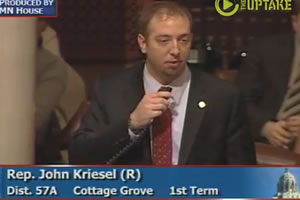 John gave for his country. He lost both of his legs serving this country. That he can physically stand now, despite his injuries shows a bit about his spirit and determination. That he stood against the Republican House in Minnesota shows it again. He served his country in Kosovo and again in Iraq, and now he serves us again by standing against blind bigotry. I don’t care what your party affiliation is, I hope that you can see the courage that he displayed in standing for what this nation symbolizes.

If you truly believe that being gay is so terribly different that folks who are gay can’t feel the same things that hetrosexuals feel for their partners, then, by all means, demand that your ministry deny homosexuals the right to marry within your church.

To demand that that ALL churches, ministries, and faiths do the same, then you have lost sight of the freedom of religion, and the freedom to choose your own path. You invite the government into your bedrooms, you invite all sorts of meddling. That is not a Republican value, it is not a Conservative value, and I, for one, would really like these radicals to GTFO of my damn party, because your blindness and short sightedness is a symptom of what ails this country. The need to meddle. The need interfere. The need to stick your nose in other folks’ business.

Northampton, Massachusetts has embraced gay marriage. It is a quiet little college town. The worst that has happened has been that gay couples can plan their weddings, buy their dresses and tuxes, and walk their dogs and get on with the business of living a life. Not a life that is drenched in sin, not a life that full of radicalism, but a normal life. Full of arguments, full of laughter, full of hopes, full of small tragedies, simply full of all the things that they watched their own parents go through.

Denying folks the right to marry makes them into a special class. It creates an inequality that drives folks to action, action that makes some folks uncomfortable.

Gay couples want only one thing: to be treated normally. To have the freedom to make the same dumb mistakes, to pick up their sweetie at the hospital, to share in the hopes and fears, and all the rest that goes with married life, that is sometimes grand, sometimes scary, sometimes good, sometimes bad, sometimes amazing, sometimes terrifying, and at all times it is the dream to share a life. To be. Nothing more. Not different. Not strange. Just to be who they are, with someone who loves them.

Don’t like them? You’re not marrying them. I’m not a fan of the asshats who use their religion as a shield from knowledge, but I’m not going to deny them the same rights as everyone else. I don’t care what folks do in the damn bedroom, and I don’t assume that MY life is the model for others. Live your lives, folks. But stop demanding that everyone else follow your path.

This is a fundamental issue. It IS about being treated “special” and I would like to see us stop treating our brethren and sistren as something special. They are folks. No better. No worse. Equal treatment under the law. No special “commitment ceremony” because “separate but equal” has no place in this country. It is a disgrace. It is shameful. It is more than time to stand against this sort of disgrace to the nation and our people.