I was just stunned by this and thought I had to point this out, because I don’t think if this guy is a troll or what, but I had an exchange with someone at MyDD who claims to be gay and “a proud Centrist Democrat” (whatever that means) who supported Proposition 8.

Here’s some of what he said;


George Tiller, the Wichita doctor who became a national lightning rod in the debate over abortion, was shot to death this morning as he walked into church services.

Tiller, 67, was shot just after 10 a.m. at Reformation Lutheran Church at 7601 E. 13th, where he was a member of the congregation. Witnesses and a police source confirmed Tiller was the victim.

No information has been released about whether a suspect is in custody.

I thought first that “Cons” was short for convicts but it turns out to be for “Conservatives”.  Behold the new face of the Republican Party youth outreach, a la Michael Steele. “Rap” from two young guys from Dartmouth College.

(put your coffee down and swallow before viewing, or your keyboard will be drenched)

Sigh.  Epic fail for wingers who are now spewing hate speech at a fairly staid group of NAACP types, and managing to offend nearly every Latino in America, but more importantly in that subset of Mexican-Americans.  There are members of Congress, and members of state legislatures across America, who are members of the National Council of La Raza. I also wonder why they haven’t mentioned guilt by association and attacked the fundors of this insidious group?  We all know they love guilt by association.

So lets talk about the associations. For those of you who don’t know much about the history of NCLR, now’s a good time for a review.


Cops apparently got in the mix at a London hotel on Wednesday when a couple people decided to rile up Boyle by saying something no one seemed to hear. But they did hear her shout, “How f—ing dare you! You can’t f—ing talk to me like that.” And after a bobby asked if there’s a problem, she shouted “Of course there’s a f—ing problem” before walking out.

She talked to cops for several minutes out in the hotel’s garage, but this is on the heels of an episode Tuesday, in which she apparently got angry after judge Piers Morgan lauded 12-year-old Talent rival Shaheen Jafargholi.

“I think that, pound for pound, that was the best singing performance we’ve seen so far,” Morgan said. Susan, who was watching at the same hotel’s bar, shouted “f— off” and shot the screen a “V,” which, for our readers who aren’t anglophiles, is on par with the ol’ dirty bird.

Where else but the moose site to try to potentially help newbies on the internet keep from forking over their cash to scoundrels?

(hint, no where else I can think up).

How many prizes do you ‘win’ daily from bogus schemes to rid us of our cash? But, what do we do? Erase? Forward to a bogus email, like interpol.org?

Someone in international law enforcement needs give us a real forwarding address so we can forward them to the police and perhaps make them switch addresses before they ‘catch’ some hapless dreamer!!! (!!! denotes outrage, sincere variety)

How about it, international law enforcement, where should we forward this stuff to?  I mean, of course, to where?

The myth of the "black male boogeyman"

For those of you who haven’t been paying attention to non-political news, I’d like to applaud a recent op-ed The Big Black Lie in the Philadelphia Inquirer, and the opinions of several Philly columnists.

They address the most recent News Flash – yet another white female accusing a scary black male of being her abductor.

Wackos on the Left:

We expected broken promises. But the gap between the soaring expectations that accompanied Barack Obama’s inauguration and his wretched performance is the broadest such chasm in recent historical memory. This guy makes Bill Clinton look like a paragon of integrity and follow-through.

From healthcare to torture to the economy to war, Obama has reneged on pledges real and implied. So timid and so owned is he that he trembles in fear of offending, of all things, the government of Turkey. Obama has officially reneged on his campaign promise to acknowledge the Armenian genocide. When a president doesn’t have the ‘nads to annoy the Turks, why does he bother to show up for work in the morning?

Obama is useless. Worse than that, he’s dangerous. Which is why, if he has any patriotism left after the thousands of meetings he has sat through with corporate contributors, blood-sucking lobbyists and corrupt politicians, he ought to step down now–before he drags us further into the abyss.

Justice and Empathy: Historical Context for a Contemporary Polemic

When President Obama nominated Sonia Sotomayor to fill David Souter’s seat on the US Supreme Court, he ensured that opponents in the confirmation process will focus sharply on the President’s listing of “empathy” among the qualifications he sought and the related question of his nominee’s ability to apply the law fairly and impartially.  Conservative activists and pundits have already been harping for weeks on the alleged problem of “empathy” and have consistently raised the fact that the traditional allegorical figure of “Lady Justice” wears a blindfold. 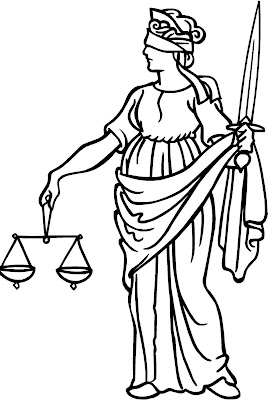 What they seem less eager to discuss, however, is the object “she” always holds in her hand and its particular condition.  “Lady Justice,” of course, bears scales.  Furthermore, “her” scales always appear perfectly balanced, neither side elevated over the other.

The most immediate symbolism of “her” scales, the significance that accords most easily with that of “her” blindfold, surely is “her” ability to avoid privileging either side in a dispute, her commitment to applying justice without being swayed improperly to one or the other.  But this rather misses the point.  When any judge renders a verdict, they very frequently imbalance their scales by deciding in favor of one side or another.  The figure thus contains a fair amount of ambiguity.  Considered another way, the balance of the scales represents the result of “her” adjudication.  One of the functions of “Lady Justice” is to recognize imbalance, i.e. injustice and restore it to its appropriate condition.  “She” must recognize that the positions of parties to a dispute do not have equally valid claims and/or positions, and render a judgment that creates a situation of fairness and justice.  Empathy certainly is not sufficient for this process, but neither is it irrelevant.