In this week’s address, the President honored the 70th anniversary of V-E Day. On this occasion, we commemorate the Allied victory in Europe during World War II. It is a day to pay tribute to the men and women who decades ago served and sacrificed for the cause of freedom. This was the generation that, by ending the war, literally saved the world, laying a foundation for peace.

The President asked that in addition to commemorating this important anniversary, we honor the men and women in uniform who currently serve our country, and recommit ourselves to the values we share with our allies in Europe and beyond: freedom, security, democracy, human rights, and the rule of law around the world.

In this week’s address, the President reiterated his commitment to expanding access to education, and to spreading the joy of reading to more children and young adults.

Earlier this week, the President announced two new efforts that, building on the progress already made by his ConnectED initiative, will do just that: a challenge to mayors, libraries, and school leaders to help every student get a library card; and commitments from libraries and major publishers to provide more than $250 million in free e-Books for low-income students. In his address, the President also previewed his upcoming commencement speech at Lake Area Tech, in Watertown, South Dakota, where he will discuss his plan to make two years of community college as free and universal for every American as high school is today.

The President is working to ensure every child has the access to the education and resources they need to be successful.

In this week’s address, the President laid out why new, high-standards trade agreements are important for our economy, our businesses, our workers, and our values. These new trade deals are vital to middle-class economics — the idea that this country does best when everybody gets their fair shot, everybody does their fair share, and everybody plays by the same set of rules. The President has been clear — any deal he signs will be the most progressive trade agreement in our history with strong provisions for both workers and the environment. It would also level the playing field — and when the playing field is level, American workers always win.

Attorney General Eric Holder bid a final farewell to what he predicts will be recognized in the next half-century as a new “Golden Age” at the Department of Justice, leaving behind a historic six-year tenure as the first African-American man to serve as the nation’s top attorney.

“This is something that has meant the world to me, it has helped define me as an individual and as a lawyer, as a man,” Holder said in his final send-off Friday with the department employees who served under him. […]

In a nod to his historic achievements, the Justice Department released a video earlier in the day featuring prominent politicians from President Bill Clinton to Rep. John Lewis to Sen. Patrick Leahy, describing Holder’s legacy as “the people’s lawyer.” […]

Slipping off his wrist a black band with the inscription “Free Eric Holder” – a fashion statement among his supporters in the Justice Department during the months-long stand-off over Lynch’s confirmation – Holder tossed the rubber bracelet into the crowd in his final act as attorney general.

“I think we can officially say now that Eric Holder is free,” he said.

Transcript of farewell speech below the fold. In this week’s address, the President spoke about his commitment to combatting the threat of climate change and to keeping ourselves and future generations safe. The effects of climate change can no longer be denied or ignored – 2014 was the planet’s warmest year recorded, and 14 of the 15 hottest years on record have happened this century.

From the White House: “A Historic Meeting”

Over the weekend, President Obama traveled to Panama City for the Summit of the Americas. The White House reports:

This past week, President Obama participated in the seventh Summit of the Americas, in Panama City, Panama. The Summit of the Americas is a tradition that brings together the leaders of North and South America to discuss issues that impact the Americas. President Obama’s participation in the Summit highlights the continuing commitment of the U.S. to upholding the role that independent civil society and the private sector play in a shared democratic agenda.

During the Summit, President Obama sat down with Brazilian President Dilma Rousseff. The two discussed shared priorities, like food security and climate change.

President Obama also sat down with Panamanian President Juan Carlos Varela to discuss the partnership between the U.S. and Panama on security, the economy, and education, and how they could further deepen ties between the two countries.

Additionally, in a historic first, President Obama met with Cuban President Raul Castro, in their first full meeting since the U.S. decided to chart a new course in relations with Cuba.

President Obama and President Castro discussed our shared histories, and the significant change in policy and the relationship between our two countries. Both leaders agreed that the majorities of the American people and Cuban people had responded positively to the thaw in relations.

“This is obviously a historic meeting.”

President Obama announced that both Cuba and America were working on the next step in normalizing diplomatic relations between the U.S. and Cuba, and were working to open embassies in both Havana and Washington, D.C.

President Obama traveled to Jamaica on Thursday and part of his visit included a trip to the Bob Marley Museum. 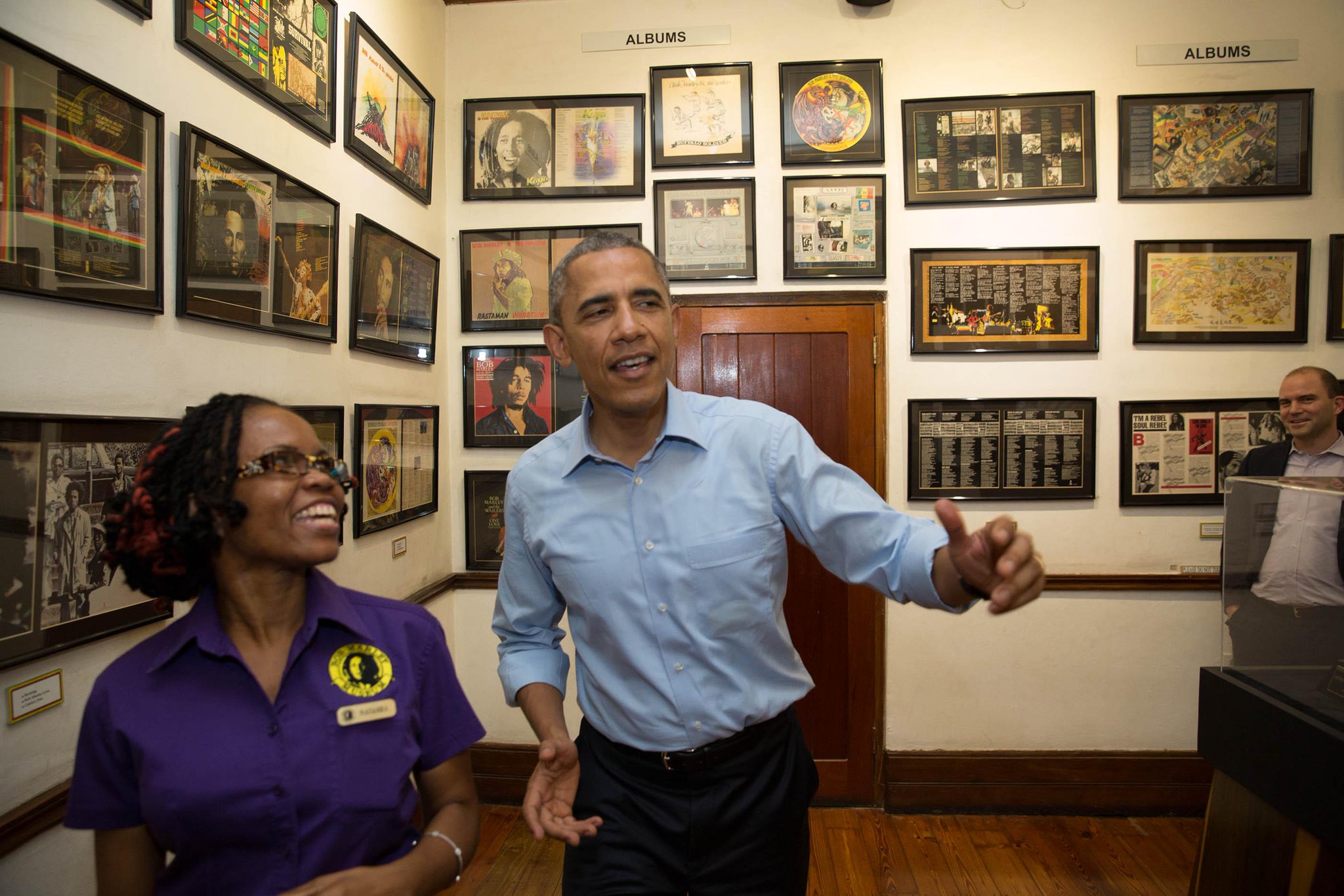 Jamaican smiles all around!

You’re in Jamaica: C’mon and smile!

(In Jamaica) Get it together, now!

Said, I see you’re having fun,

Dancin’ to the reggae rhythm,

Oh, island in the sun:

Oh, and he was also in Jamaica to launch his Young Leaders of the Americas Initiative (YLAI) to expand opportunities for emerging entrepreneurs and civil society activists. From a Town Hall:

“If there’s one thing I know from my own life, it’s that with hard work and hope, change is always within our reach.” -Obama in Jamaica

Transcript below the fold.

From the White House, “Our Endangered Climate”:

As part of the effort to support public health with a sense of purpose and determination, the Obama administration has focused on how climate change affects our environment. Our public health is deeply tied to the health of our environment. As the planet warms, we face new threats to our health and well-being, and the President is taking steps to counteract those threats.

Tuesday, President Obama spoke at Howard University Medical School in Washington, D.C., joined by the Surgeon General, Dr. Vivek Murphy, and Gina McCarthy, the head of the Environmental Protection Agency, at a roundtable. The President explained what the Administration has already done to reduce the dangerous levels of carbon dioxide that are contributing to climate change, and discussed ways to prepare our communities for the impacts that cannot be avoided.

President Barack Obama gives remarks to the press during a roundtable discussion on climate change and public health at the Howard University College of Medicine in Washington, D.C., April 7, 2015

In keeping with the President’s directive to make government as open as possible, as well as his commitment to combating climate change, the Administration also announced this morning that it’s expanding its Climate Data Initiative to include more than 150 health-relevant datasets on climate.data.gov.

Feel free to share other news stories in the comments.