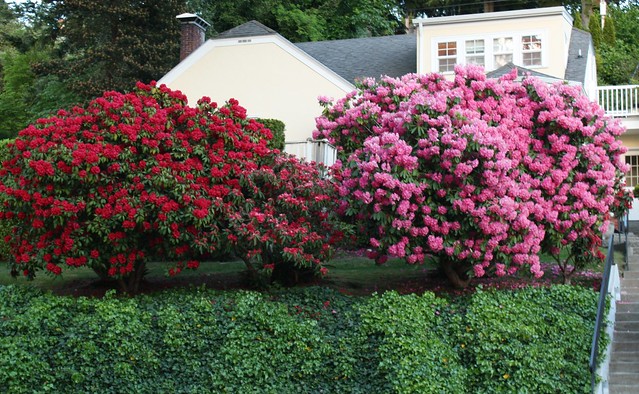 Spring time is Rhododendron time around the world. These prolific bloomers are native to Asia, North America, Australia, and Europe. They are members of the Genus Rhododendron  and the Family of Ericaceae (Heaths). The name is derived from ancient Greek (rhódon “rose” or “red“) and déndron “tree”). There are some 800 to 1,000 species and 28,000 cultivars listed by the Royal Horticultural Society. Azaleas are a subgenera of Rhododendron.

The President’s Weekly Address post is also the Weekend Open News Thread. Feel free to share other news stories in the comments.

In this week’s address, President Obama discussed new actions by the Environmental Protection Agency to cut dangerous carbon pollution, a plan that builds on the efforts already taken by many states, cities and companies. These new commonsense guidelines to reduce carbon pollution from power plants were created with feedback from businesses, and state and local governments, and they would build a clean energy economy while reducing carbon pollution.

The President discussed this new plan from the Children’s National Medical Center in Washington, D.C., where he visited children whose asthma is aggravated by air pollution. As a parent, the President said he is dedicated to make sure our planet is cleaner and safer for future generations.

Saturday All Day Check-in for the Herd

Friday Coffee Hour: Check In and Hangout for the Herd

President Obama Speaks to West Point Graduates … and the Nation

(Transcript below the fold)

This morning, President Obama traveled to West Point to congratulate the newest officers in the United States Army and to reflect on America’s foreign policy agenda. In the President’s remarks, he acknowledged that our world is changing with accelerating speed and that America must be equipped to respond to an increasingly dynamic environment.

The President spent most of his speech outlining his vision for how the United States, and our military, should lead in the years to come. The four elements of American leadership included:


1.   Using military force when our core interests are at stake or our people are threatened

2.   Shifting our counter-terrorism strategy by more effectively partnering with countries where terrorist networks seek a foothold

3.   Continuing to strengthen and enforce international order through evolving our institutions, such as NATO and the United Nations

4.   Supporting democracy and human rights around the globe, not only as a matter of idealism, but one of national security

President Obama articulated that the United States is a global leader – a nation that “must always lead on the world stage.”

"Just because we have the best hammer does not mean that every problem is a nail." -President Obama on U.S. leadership in the world

A thank you to the “PLOTUS”-Poet Laureate Natasha Trethewey

In June, a new poet laureate will be appointed, but before Trethewey leaves, I wanted to take a moment to say “thank you”.

Thank you for your poetry and prose.

Thank you for representing so much of what we as women, as black women, as Americans face in today’s world.

Thank you for weaving so much history into what you write.

Thank you for exploring the complexities of race, racism and identity and oppression.

Thank you for portraying those who are often forgotten.

His 15 minutes are over, but he apparently does not realize it.  He’s written an open letter to the parents of the victims of the mass shooting in California.  I do not think that he has done himself any favors.