Jason Collins, “We’ve got your back”

The president offered congratulations and support on Collins’ courage and willingness to be the first in the four dominant pro sports to make this announcement.

“So proud of you, Jason Collins! This is a huge step forward for our country. We’ve got your back!” she tweeted, signing it “-mo,” which indicates she – not an aide – sent the message. 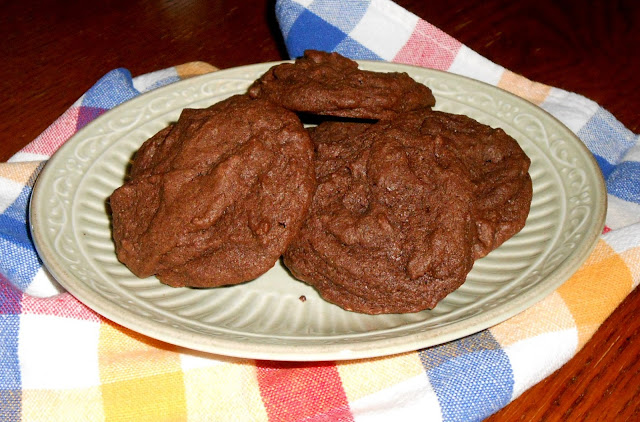 As you may know, our son will be graduating with his master’s in Mechanical Engineering, and accepting a commission as Second Lieutenant in the United States Air Force. We’re having a party to celebrate, with a menu that includes pulled pork sandwiches, chicken sandwiches, baked beans, chips, cut fruit, and COOKIES!

I plan on making about 15 dozen cookies, in total. Double chocolate, chocolate chip, peanut butter, lemon cookies, they all sound good to me.

This recipe for double chocolate cookies makes about 4 dozen. They are terrific. Each time I’ve made them the texture has been fabulous, and they freeze well, too.

I have the first two dozen out of the oven, and the next ones are baking. You can imagine the smell…

Out the Back Window – House Wren Songs

The first tiny House Wrens of the season returned last week. They have just started their singing. It will seem non-stop for the next six months.

For National Oatmeal Cookie Day and National Raisin Day, would you prefer the two combined, or is raisins in anything an abomination?

Are you now, or have you ever been, a member of the AARP?

If you are too young, are you in the habit of traipsing on the lawns of old people?

Have you ever had a hairstylist really mess up your hair? How so?

Conservatives seem to love America, but hate everyone in it.

A year and a half ago, Rick Perry wanted to eliminate the Department of Energy. He plans to power Texas with explosions.

Jason Collins is threatening my traditional ignoring of basketball.

a wedding is the most beautiful gift you can ever give to your parents’ friends.

People who criticize the Bible should keep in mind it was My first novel.

Dear Subaru: maybe “the backseat of my Subaru is where my daughter grew up” could have been written differently?

We’re near a great moment in American history. Coming out as a homophobe will soon be more damaging to your career than coming out as gay.

Ted Cruz is like the GOP’s own Allstate Mayhem guy.

A Fascinating Study on Mexican Immigrants Who Can’t Speak Spanish

Picture a Mexican immigrant, and several images generally come to mind. The average American might imagine tacos and his or her gardener, for instance. To this, of course, would be added the ubiquitous sound of Spanish. Almost every American links Hispanics and the Spanish language together. There is reason for this; after all, most Hispanics do have origins from countries which are Spanish-speaking. With regards to Mexico, Spanish is indeed the national language. It would not be, and is not, unreasonable to assume that the typical Mexican immigrant speaks Spanish.

What happens, however, when those Mexican immigrants can’t speak Spanish?

The result is the topic of a fascinating study titled “Indigenous Mexicans in California Agriculture.”

In an interview with the Chicago Tribune, retired Supreme Court Justice Sandra Day O’Connor admitted that the Court possibly erred when it decided to take Bush v. Gore:

Maybe the court should have said, ‘We’re not going to take it, goodbye.

That, however, wasn’t even the kicker.  This was:

It turned out the election authorities in Florida hadn’t done a real good job there and kind of messed it up. And probably the Supreme Court added to the problem at the end of the day. (emphasis my own)

Think about that for a second.  She pretty much admits that the biggest decision rendered while she sat on the Supreme Court she provided the necessary vote to get it wrong and swing a presidential election.  Perhaps this could have been somewhat understandable if George W. Bush had won the popular vote and there was a sense in the nation that the courts should step in to make sure the popular vote winner took office.  That, however, was not the case.  Bush lost the popular vote and her vote helped pave the way for the loser to take office.

In what ways do you consider yourself to be creative?

What is your favorite dance/type of dancing?

Are you more of a participator or observer?

What do you think is the single most important/contributory factor in the dumbing down of America?

If its Sunday its Meet the Press with your host John McCain. John’s guests today include NBC’s David Gregory. #MTP

Homophobia is a sacred union between a man and his bigotry.

65% of NJ residents say they are worried that warmer weather increases the risk of being shouted at by Chris Christie tmz.com/2012/07/06/chr…

If Obama library had only one exhibit: “He stopped McCain/Palin from governing,” a grateful nation would still flock to see it.

When blow-dried script-readers like Tom Brokaw started to believe they had wisdom to share, journalism atrophied a little bit more.

The John McCain Memorial should be a list of the wars we didn’t let him start.

Jack the Ripper reevaluated: he kept our neighborhoods safe from vice.

When 9/11 truthers emerged, dem politicians ignored them. When conserve conspiracy theorists come out, GOPers hold hearings on their claims.

#Facebook paid $0 corporate income tax on $1B in profits in 2012, but Paul Ryan still insists we can make it up by killing #Medicare

just saying: Whenever I “retweet” I think about Barbara Walters

Tonight on Game of Thrones: after he de-tongues the new court jester, Joffrey kills at the King’s Landing Correspondents’ Dinner.

If you named your son Luke but have never dropped the “I am your father” line on them, why did you even bother?

Just bought pretzels and it’s not even National Pretzel Day.

Good morning Motley Meese! Hope your weekend was lovely. Remember to let your peeps know where you are!

This week’s shot of the week: Great Blue Heron in an evergreen tree. I’ve taken lots of pics of Great Blues, but this is both the oddest and my favorite. Like most triumphal arches, this one celebrates a victory of war.

The Arch of Titus has provided the general model for many of the triumphal arches erected since the 16th century.

All The News Fit To Share:  Add your own in the comments!

If media covered America the way we cover foreign cultures

IT HAS HAPPENED AGAIN, LADIES AND GENTLEMEN:

Yet another massacre has occurred in the historically war-torn region of the Southern United States – and so soon after the religious festival of Easter.

Brian McConkey, 27, a Christian fundamentalist militiaman living in the formerly occupied territory of Alabama, gunned down three men from an opposing tribe in the village square near Montgomery, the capitol, over a discussion that may have involved the rituals of the local football cult. In this region full of heavily-armed local warlords and radical Christian clerics, gun violence is part of the life of many.

Many of the militiamen here are ethnic Scots-Irish tribesmen, a famously indomitable mountain people who have killed civilized men – and each other – for centuries. It appears that the wars that started on the fields of Bannockburn and Stirling have come to America.

As the sun sets over the former Confederate States of America, one wonders – can peace ever come to this land?

I selected the example, however, the rest of the writing is very interesting.