And so it begins …

The 114th Congress was sworn in yesterday with much fanfare. Finally, according to the beltway pundits, we have Republican lawmakers ready to do the serious business of the people. Speaker John Boehner, entering his 5th year at the helm of the ship of fools known as the Republican House, is now joined by Senate Majority Leader Mitch McConnell, the very very serious doer-of-the-people’s-business who once declared that the top priority of the Republican Senate was to make Barack Obama a one term president.

The 112th and 113th Congresses were marked by what they were against rather than what they were for. Repealing the Affordable Care Act consumed much of the time, forced birth initiatives consumed some and of course the investigations into the Fox scandals (IRS targeting of conservatives, Benghaziiii, the president’s birth certificate) consumed more.  But they pretty much knew that the show bills they passed were big sloppy kisses to their base rather than legislation that would be taken up by the Senate for consideration. Now, every bill they pass will be part of the resume of Republican Governance that they are building to, according to them, “show the American people how grand this ol’ party is so that they will elect a Republican president”. Remember the Bush years of glorious health and prosperity for the American people? Funny, neither do I. Maybe we can ask a beltway pundit to help us remember.

The House of Reprehensibles did not take long to show us what they will consume their time with over the next two years.

A series of tubes filled with reruns
~


The soon-to-be-formed select committee to investigate the Benghazi attacks will have 7 Republican members and 5 Democratic members, a senior GOP leadership aide confirmed to TPM on Tuesday afternoon.

That means Speaker John Boehner (R-OH) will reject a request by House Minority Leader Nancy Pelosi (D-CA) that the panel be evenly divided between Republicans and Democrats in order to be “fair.”

Rep. Adam Schiff (D-CA) has been an outspoken critic of the Republican-led effort investigate the Obama administration’s response to the attack on a diplomatic outpost in eastern Libya. When asked how much the new special committee would cost taxpayers, Schiff was not optimistic about it being cheap. “I think unquestionably it will be in the millions,” Schiff said in a phone interview with ThinkProgress. “And it depends on how long they stay at it. They seem to have an insatiable appetite for this subject, so clearly in the millions. Whether it will go beyond that into the tens of millions may depend on just how crazy they are.”

Five House committees have already investigated the Benghazi tragedy and issued biased reports; there have been two Senate committee reports plus the Accountability Review Board’s findings. The bipartisan reports found errors on the part of State Department personnel and recommended staffing and other changes. But because none of the investigations were able to charge then-Secretary of State Hillary Clinton with incompetence, or prove that President Obama tried to cover up the truth to get re-elected, Republicans won’t believe them, and insist there’s more to “investigate.”

Thus we have the latest House Benghazi stunt – and Democrats should stay away from it. […]

Gowdy’s committee is best understood as as a base-energizing fundraising tool for the GOP, part of what Politico’s Michael Hirsch calls “the Benghazi industrial complex,” engineered to damage Clinton so much she either can’t run for president or decides it’s not worth the pain. Of course, Benghazi fever hasn’t spread beyond the fever swamps of Obama hatred that afflict the GOP’s far-right base. But that’s enough to keep it alive, and potentially make it a potent midterm-election organizing tool. House Democrats should make that role clear by boycotting it.

Short answer: after 2 years there is literally NOTHING that a Democrat can point out that would make a whit of difference. They are there as fig leafs. Period.

The Party of Lincoln? Er, no.

On Sunday morning, the above-the-fold headline in the Wisconsin State Journal, the paper of record for the State of Wisconsin, declared “Assembly members against secession”.

Let’s ignore for a moment how low the bar for political sanity has been set if the paper is reporting as NEWS(!) that the Republican caucus in the state assembly is not in favor of Wisconsin seceding from the Union.

Let’s also ignore the fact that not all of the Republicans in the state assembly signed the letter that Assembly Speaker Robin Vos (R) sent to the delegates meeting this weekend at the Wisconsin State GOP Convention. Because it makes me cringe to think that my fellow Wisconsinites would elect state representatives who don’t even believe in the United States Constitution.

Revenge of the Republican Unemployed?

– Unemployed Republican Voters Looking at the Republicans in the U.S. Senate

Sadly, Republicans around the country were ill represented by Republicans in the Senate today. pic.twitter.com/Tb4AkSEEV4 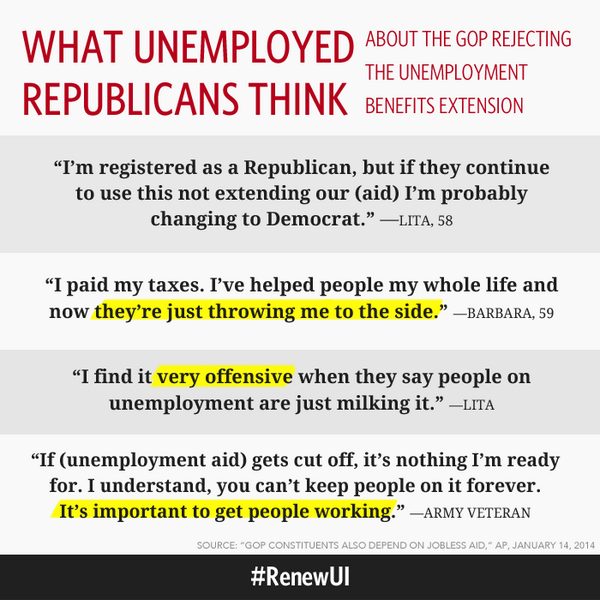 Building our own wave.

In 2009, Chris Christie and Bob McDonnell were the beneficiaries of the tea party anger purchased with corporate money, promoted by Fox News and organized by FreedomWorks and the Dick Armey in the Summer of 2009.

Christie of New Jersey and McDonnell of Virginia in November 2009 … Scott Brown of Massachusetts in March 2010 … and then the tea party wave election in November 2010 that appeared to sweep away our country’s common sense and which set up gerrymandered Republican majorities in statehouses across the country.

Today’s polls seem to indicate that we have a good chance to turn the tide in Virginia but not much hope in New Jersey where Gov. Chris Christie (R) appears to be a shoo-in for re-election.

This comes in an attempt to raise money for the state Republican Party by using two high profile candidates in this year’s New York City elections.  One of the candidates, Anthony Weiner, is pretty much dead in the water.  He’s lagging well behind in the polls and will not make the Democratic runoff that will follow the primary.  The other is former governor Eliot Spitzer, who is running for comptroller and currently leading in his race.

The mailing’s basic premise is that because these two men did icky things, and because the Democratic Party is considerably stronger than the Republican Party in New York, all Democrats are icky and you, the recipient, should send money to help Republicans.

The Demographics of America’s Governors: Place of Birth

The Winds of Change in Georgia, Part 2

This is the second part of two posts describing a fascinating election in Georgia: the 1980 Senate election, in which Republican Mack Mattingly beat scandal-ridden Democrat Herman Talmadge. This was the first time that a Republican Senator was elected in Georgia for more than a century. Even more interestingly, the areas that the Democratic candidate won tend to vote strongly Republican today, and vice versa.

The previous post ended by bringing up the role of the black vote:

So did Republicans win the black vote in this 1980 election?