I vote. I take my kids to vote.

Voting is the currency of our democracy.  It’s how we choose our political leaders who represent us.  Voting is what we have.

We have midterm elections for 435 House seats.  33 Senate seats.  Almost every state house, some of the state senates, some statewide offices, county offices, and many schoolboard offices.  Perhaps some municipal offices too.  In other words, maybe there’s not a president at the top of the ticket, but there is plenty to vote for.

I believe every vote counts.  I live in Utah, I don’t have the luxury of not voting.  I have voted in elections decided by fewer than 200 votes.  I have watched elections be decided by single digits.

Salt Lake County had a primary this June, for Auditor on the Democratic side, Assessor on the Republican side, and many school board positions.  Turnout was 9%.

We have pilot programs for same-day registration in Salt Lake County, and All Vote by Mail in the county to the north, Davis.

Everything depends on turnout.  Even in Utah.  To hold our State house seats, keep our senate seats, pick up a few more seats, and help the county elections.

From Maine to Hawaii, and Alaska to Florida, every vote counts.

The highest duties we can do as citizens include helping other people vote.

We have a couple weeks left for voter registration in most places.  Some places seem to have complicated requirements.

Then we GOTV and persuade the middles until Nov 4.

We can keep going on this registration through the deadlines, which is Oct 6 here in Salt Lake County.

No One Could Have Predicted: Hobby Lobby decision protecting FLDS again Dept. Labor

Remember Hobby Lobby?  That corporate use of personal religious freedom to make decisions about employees’ benefits?

Guess what?  Did anyone really think that decision would stay put and never been seen again?  Because Wheaton College decision came out 3 days later?  But still, maybe, just maybe it could have been buried.

But wait!  The Fundamentalist LDS, have decided not to pay kids to harvest pecans.  The Department of Labor is investigating labor violations.  FLDS leaders claim they do not have to testify because “religious freedom.”

Do Lutherans have the same protection?  How about followers of the Flying Spaghetti Monster?

Judge David Sam is in a federal court, and overruled another judge who was a magistrate.  I am not a lawyer and welcome the help of lawyers to explain this better.  It just seems to be that “religious freedom” just became a huge legal reason to not do anything you didn’t feel like doing.

Ironically, the judge deciding the case chose to not investigate the religious beliefs:

“It is not for the Court to “inquir[e] into the theological merit of the belief in question,” Sam wrote, citing the Hobby Lobby decision.  “The determination of what is a ‘religious’ belief or practice is more often than not a difficult and delicate task …. However, the resolution of that question is not to turn upon a judicial perception of the particular belief or practice in question; religious beliefs need not be acceptable, logical, consistent, or comprehensible to others in order to merit First Amendment protection.”

I think that any religious group could have cited Hobby Lobby in any variety of cases, and it is just luck that it happened here first. This is not limited to the FLDS.  And please remember, this is not an opportunity for you to bash the LDS.  If you need to do that, please write your own diary.


Please do not use this diary for LDS or Mormon bashing. 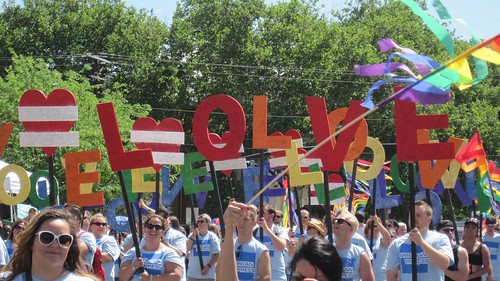 I moved to Utah 27 years ago, end of May 1987.  I already knew a few LGBTQ people, mostly from college and campus ministry, and a couple in my small home town.  AIDS was still kind of new, and scary.  My church has long welcomed everyone, and I had friends: they were a lesbian couple with two adopted children.

Equal marriage was a fantasy, barely on the radar.  Mostly, I wanted my friends to be safe, and able to have jobs & places to live.  I moved away, back, away again, and finally back 16.5 years ago. The Nobel Prize in Chemistry 2013 was awarded jointly to Martin Karplus, Michael Levitt and Arieh Warshel “for the development of multiscale models for complex chemical systems”.

2013 #NobelPrize #Chemistry the winners are theoretical chemists, so they get a look in this year

2013 #NobelPrize #Chemistry Interesting, Karplus did a lot of work on NMR, an essential method for discovering structure

2013 #NobelPrize #Chemistry So this is lovely. Warshel and Levitt have developed modelling and structure prediction methods for complex

2013 #NobelPrize #Chemistry molecules, while Karplus did a huge amount of work on Nuclear Magnetic Resonance Spectroscopy

Nobel Prize.org is 1:23 from the announcement.  Of course, yesterday was delayed.

#NobelPrize It’s possible that some of the nano tech pioneers will be awarded tonight but yeah no clue really.

#NobelPrize Or Bruce Ames may take it.

COMING UP: Announcement about 2013 #NobelPrize in #Physics is delayed until 12:15 pm at the earliest.

Did someone not answer their phone?

Surpise! The Nobel for Physics goes to all of you, for your unceasing ability to obey its laws. Well done you.

Ian Tracey is head of @CERN UK – he shared this photo of a panel being ignored because their audience was waiting for the Nobel announcement.  Which is delayed a bit longer.

Early speculation is it will be Peter Higgs.  Or a combination of Higgs and the experimentalists at CERN.  Or a lot of people will be left out.  Or no one will be happy. There is concern about giving due credit, and not diluting the prize.  Etc.#twittersummary

@upulie shares some other possible contenders. We voted on this series name.  If you want to host, please leave a comment.  I have been remiss in my cross-posting so one link still goes to the orange place.

All The News, Sunday: Who Is Your Neighbor

Jackie Robinson with his son David at the March on Washington for Jobs & Freedom, August 28, 1963. Photo credit from @BeschlossDC .

This is your Sunday night news.  Look for more news in MOTs and any open threads from JanF.

Following the success of Nelson Mandela’s 90th birthday celebrations in London’s Hyde Park in June 2008, it was decided that there could be nothing more fitting than to celebrate Mr Mandela’s birthday each year with a day dedicated to his life’s work and that of his charitable organisations, and to ensure his legacy continues forever.

The Mandela Day campaign message is simple: Mr Mandela gave 67 years of his life fighting for the rights of humanity. All we are asking is that everyone gives 67 minutes of their time, whether it’s supporting your chosen charity or serving your local community.

Mandela Day is a call to action for individuals – for people everywhere – to take responsibility for changing the world into a better place, one small step at a time, just as Mr Mandela did.

Sometime this week, please spend 67 minutes doing something for a neighbor.

Diary title refers to this parable from Jesus:

25 On one occasion an expert in the law stood up to test Jesus. “Teacher,” he asked, “what must I do to inherit eternal life?”

28 “You have answered correctly,” Jesus replied. “Do this and you will live.”

29 But he wanted to justify himself, so he asked Jesus, “And who is my neighbor?”

30 In reply Jesus said: “A man was going down from Jerusalem to Jericho, when he was attacked by robbers. They stripped him of his clothes, beat him and went away, leaving him half dead. 31 A priest happened to be going down the same road, and when he saw the man, he passed by on the other side. 32 So too, a Levite, when he came to the place and saw him, passed by on the other side. 33 But a Samaritan, as he traveled, came where the man was; and when he saw him, he took pity on him. 34 He went to him and bandaged his wounds, pouring on oil and wine. Then he put the man on his own donkey, brought him to an inn and took care of him. 35 The next day he took out two denarii[c] and gave them to the innkeeper. ‘Look after him,’ he said, ‘and when I return, I will reimburse you for any extra expense you may have.’

36 “Which of these three do you think was a neighbor to the man who fell into the hands of robbers?”

37 The expert in the law replied, “The one who had mercy on him.”

Jesus told him, “Go and do likewise.”

Notes:  v. 27 is found in the Hebrew scriptures of Leviticus and Deuteronomy.

All The News: Ghosts & Rats I tend to look at newspapers’ web sites around the world and country.  I especially look for not the headline, but a separate aspect of the story.  And I love followups.

Any thoughts on news?

All The News: Independence Day Eve All The News: Half-Year Sunday Egyptians took to the streets on Sunday for nationwide protests against President Mohammed Morsi, presenting a massive popular opposition that rivaled the size of demonstrations that toppled President Hosni Mubarak more than two years ago.

By early evening, legions of protesters had crowded into Cairo’s Tahrir Square and filled several city blocks in front of Ittihadiya Palace, the president’s main residence, demanding that Mr. Morsi step down and call early elections.

In most protest areas, the atmosphere was ebullient. Families walked with children in tow, some with their faces painted, munching on snacks and waving Egyptian flags. Passing motorists honked their horns, lending a festival aspect to the marches despite weeks of concern over the potential for violence.

H/T to @hrana – This is only the smallest slice of news about a very large event.  Some of the tweets look grim.