In the News: End of Combat Operations in Afghanistan

Today’s ceremony in Kabul marks a milestone for our country. For more than 13 years, ever since nearly 3,000 innocent lives were taken from us on 9/11, our nation has been at war in Afghanistan. Now, thanks to the extraordinary sacrifices of our men and women in uniform, our combat mission in Afghanistan is ending, and the longest war in American history is coming to a responsible conclusion.

@BFriedmanDC: What the end of two wars looks like: 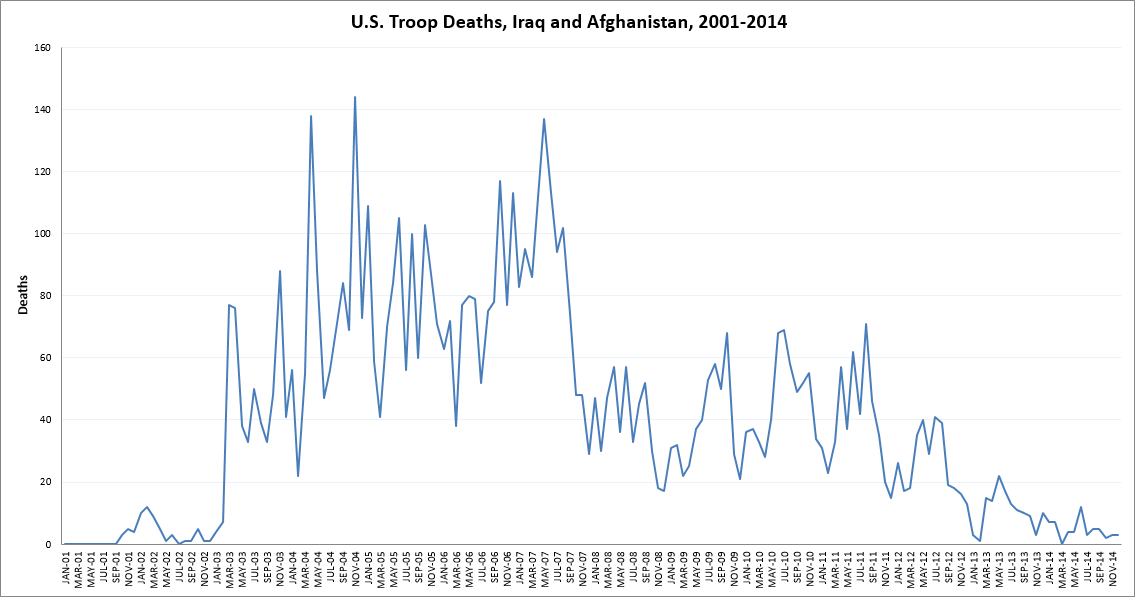 The War In Afghanistan By The Numbers

13: number of years the war lasted, making this the longest war in American history

140,000: highest number of U.S. troops present in the country, in 2010, during the surge begun at President Obama’s behest

13,500: number of international troops that will stay in country for Resolute Support, including roughly 10,800 U.S. troops (a number that will continue to fall through 2015 and 2016), and 1,000 more than planned earlier this year

2,224: the number of U.S. troops, according to an AP tally, who were killed in Afghanistan during the war, with more than 1,000 international coalition troops killed

17,674: estimated number of U.S. troops wounded during Operation Enduring Freedom, according to the website iCasualties.org

21,000: estimate number of Afghan civilians killed since 2001 as a result of “crossfire, improvised explosive devices, assassination, bombing, and night raids into houses of suspected insurgents,” according to the website Costs of War

90: percentage of troops that are now home from Iraq and Afghanistan from the 180,000 that were in both countries when President Obama took office, according to a White House statement noting that 15,000 troops remain

THE PRESIDENT:  Good afternoon, everybody.  As a candidate for President, I pledged to bring the war in Iraq to a responsible end — for the sake of our national security and to strengthen American leadership around the world.  After taking office, I announced a new strategy that would end our combat mission in Iraq and remove all of our troops by the end of 2011.

As Commander-in-Chief, ensuring the success of this strategy has been one of my highest national security priorities.  Last year, I announced the end to our combat mission in Iraq.  And to date, we’ve removed more than 100,000 troops.  Iraqis have taken full responsibility for their country’s security.

A few hours ago I spoke with Iraqi Prime Minister Maliki.  I reaffirmed that the United States keeps its commitments.  He spoke of the determination of the Iraqi people to forge their own future.  We are in full agreement about how to move forward.

So today, I can report that, as promised, the rest of our troops in Iraq will come home by the end of the year.  After nearly nine years, America’s war in Iraq will be over. […]

The tide of war is receding.  The drawdown in Iraq allowed us to refocus our fight against al Qaeda and achieve major victories against its leadership — including Osama bin Laden.  Now, even as we remove our last troops from Iraq, we’re beginning to bring our troops home from Afghanistan, where we’ve begun a transition to Afghan security and leadership.  When I took office, roughly 180,000 troops were deployed in both these wars.  And by the end of this year that number will be cut in half, and make no mistake:  It will continue to go down.

Editor’s Note: Feel free to share other news stories in the comments.