Long established components of our social infrastructure and legal precedent are assertively being challenged by a radical political agenda which has cynically, and perhaps unwisely, exposed old wounds: 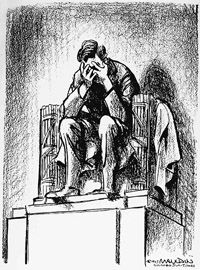 The 2012 election is shaping up to be more polarised along racial lines than any presidential contest since 1988, with President Barack Obama experiencing a steep drop in support among white voters from four years ago.

At this stage in 2008, Obama trailed John McCain by seven percentage points among white voters. Even in victory, Obama ended up losing white voters by 12 percentage points, according to that year’s exit poll. But now, Obama has a deficit of 23 points, trailing Republican Mitt Romney 60 per cent to 37 per cent among whites, according to the latest Washington Post-ABC national tracking poll.

Partisans are equally convinced of their impending victory; the Right, for whatever reason, is cheerfully and sincerely anticipating a Romney landslide and vindication.  Whatever the outcome, and it certainly seems reasonable to anticipate an Obama win on evidence, the angst will be profound; stand by for the crazy.