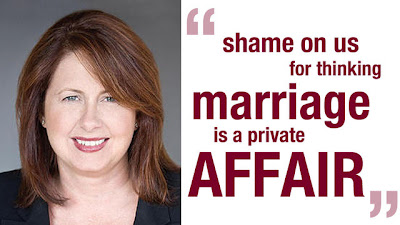 Minneapolis, Minnesota’s City Pages published a letter to recently resigned state Senator Amy Koch. Koch, resigned after an affair with a male staffer. Koch was deeply involved in the fight to put a Constitutional Amendment before Minnesota to define marriage as being between a man and a woman.

On behalf of all gays and lesbians living in Minnesota, I would like to wholeheartedly apologize for our community’s successful efforts to threaten your traditional marriage. We are ashamed of ourselves for causing you to have what the media refers to as an “illicit affair” with your staffer, and we also extend our deepest apologies to him and to his wife. These recent events have made it quite clear that our gay and lesbian tactics have gone too far, affecting even the most respectful of our society.

We apologize that our selfish requests to marry those we love has cheapened and degraded traditional marriage so much that we caused you to stray from your own holy union for something more cheap and tawdry. And we are doubly remorseful in knowing that many will see this as a form of sexual harassment of a subordinate.

It is now clear to us that if we were not so self-focused and myopic, we would have been able to see that the time you wasted diligently writing legislation that would forever seal the definition of marriage as being between one man and one woman, could have been more usefully spent reshaping the legal definition of “adultery.”

Forgive us. As you know, we are not church-going people, so we are unable to fully appreciate that “gay marriage” is incompatible with Christian values, despite the fact that those values carry a biblical tradition of adultery such as yours. We applaud you for keeping that tradition going.

And finally, shame on us for thinking that marriage is a private affair, and that our marriage would have little impact on anyone’s family. We now see that marriage is more than that. It is an agreement with society. We should listen to the Minnesota Family Council when it tells us that marriage is about being public, which explains why marriages are public ceremonies. Never did we realize that it is exactly because of this societal agreement that the entire world is looking at you in shame and disappointment instead of minding its own business.

From the bottom of our hearts, we ask that you please accept our apology.

That is how you snark someone who has made it her mission to preach to folks on how to run their lives, what is appropriate, and caught not just with her pants down, but wronging her faith and constituents.

I am a proponent of marriage equality. I may be a Republican, but no where in that republicanism, does it mean that I support denying citizens rights. It doesn’t mean that I want to see the First Amendment crumpled up into a wee ball, and tossed to the side. I have strong respect for those of faith, I have strong faith myself, but that doesn’t mean that ministries and churches have the right to impose their own readings of text on others. Be they Unitarians, Methodists, Episcopalians, Pagans, Scientologists, Hindus, Muslims, and most especially those without faith. That is really the crux of things.  Freedom of religion is the freedom to practice whatever faith, and be free from others imposing their views of religion upon you.

The thrust of any argument against marriage equality has been that it tears apart family values. Makes them meaningless. Because, as we all know, if someone believes differently than you, and is not a part of your congregation, their actions impact and lend meaning to your own by leaching into the ether, just by simply being…

What I have touched on before, is that we are entering a time, when folks are forgetting their vows. This is a danger to the nation. When folks consider their vows to be inconvenient to their lives, they cast them aside. Lately, it isn’t just that of marriage that is getting tossed aside, but every time we said the Pledge of Allegiance, we promised to extend the blessings of the republic to all of our people. Liberty and justice for all. Not just the folks who make us comfortable or agree with us. Not just the folks who pray the way we do. For all. We swore to uphold the republic as indivisible, as one nation. Not Real America and Faux America, but one. A lot of folks have forgotten that pledge. A lot of folks seem in a hurry to tout what they believe the Founding Fathers would want us to do, by tossing aside the very Bill of Rights.  There are those who want to see the Ten Commandments be engraved on the side of every State House in the nation, and yet seem to forget those pesky things say: Thou shalt not commit adultery. Thou shalt not bear false witness. Thou shalt not steal. And work tirelessly to defend folks who break those very Commandments, and apologize for them.

We have in a race right now for President, Newt Gingrich, who wants to define marriage, yet cannot stay within one himself, at least not without breaching that vow. His own actions sully the institution far more than partners who have stayed faithful for years, without the blessings of the church, and denied the same rights to marry as their brethren and sistren, by dint of who they love. That folks leap to this man, who wants to take the highest job in the nation, and swear to the nation that he will execute those duties faithfully, cannot himself even keep a promise to his own wife, and certainly not to even his own God to forswear all others.

And so, when John wrote his wee letter, he touched on all that, and twisted the knife a little, and made that sad turn into a wee bit of schadenfreude. Which is perhaps a bit better than succumbing to backpfeifengesicht–German for “face that needs a fist” which is a term that we NEED to bring into common parlance and I ask you to spread it far and wide.