FALL OF THE HOUSE OF MURDOCH I: How People Power Shook the Murdoch Monopoly

My FINAL UPDATE for US readers. In case this seems like a parochial issue, you ought to know that the Chief Executive of News International at the time when all these scandals took place was Les Hinton (pictured below), who is now is the publisher of the Wall Street Journal for Murdoch. Follow his scandalous coverup in Media Matters. Also Andy Coulson, former editor of News of the World and Prime Minister David Cameron’s former Head of Communications will be arrested tomorrow.

AMAZING NEWSFLASH! The News of the World (commonly known as ‘News of the Screws’ because of its salacious coverage) is to be axed for good. Though it was the biggest selling English language paper in the world, many major companies including Tesco had refused to advertise in it and the brand was damaged for good. This of course is a blow for the Murdoch Empire, but a tactical retreat. The pressure isn’t off. But it’s killed his main Sunday Paper in the UK

Full transcript of James Murdoch’s statement is here. But John Prescott, former Deputy PM whose phone was allegedly hacked too has said on BBC:


“a typical management stunt of Mr Murdoch. None of the management are going, all the poor old workers are going”.


“All it will be is a rebranding exercise”

It’s just been announced that because of over 100,000 submissions against Rupert Murdoch’s acquisition of the satellite channel BSkyB, government approval by our Culture Secretary Jeremy Hunt – largely expected this week – will have to be deferred several months. The Government are still arguing that revelations of illegal activity among senior News executives should not affect the principle of the takeover – but everything is to play for.

This could be a crucial moment for press freedom and media plurality in the UK. Murdoch’s takeover the largest broadcaster (by revenue) in the UK, would have given him a unique cross platform monopoly. Thanks to series of favours by cowed and appeasing politicians (especially Margaret Thatcher) Murdoch’s News International has been allowed to accumulate nearly 40 percent of the newspaper market. He also has key sports and film rights in the UK. A combination of BSkyB and News International would have made him much more powerful in the UK than Berlusconi is in Italy – and at least Berlusconi is an Italian citizen.


The tyrants lose their swagger and those that lived in fear dare to speak out. The dynamics of the News International saga are similar to the ones that shape the fall of dictatorial regimes, except in this case it is some mighty media executives who are suddenly fearful and the politicians who are liberated.

Yesterday’s exchanges in the Commons were ones I thought I would never witness. They are of historic importance. Senior elected politicians dared to challenge the powerful Murdoch empire and there was an air of catharsis as they did so.

For more on Murdoch’s corrosive and corrupting effect on British journalism, and and his coarsening of public life and politics in the UK, follow me below the flip.

I know many journalists, and when news of phone hacking of the phones of the Royal Family was investigated by police in 2006, I was told the practice was rife and this was just the tip of an iceberg. The Metropolitan police closed down the enquiry with only two convictions, though it was common knowledge that many police officers had (illegally) received thousands of pound in illegal payments from News International, and particularly its tabloid sunday The News of the World.

The officer who opened and closed down that investigation was Andy Hayman, who went on to a lucrative op-ed column spot on Murdoch’s Sunday Times.

Now, thanks to Operation Weeting, those original files have been reopened. Bear in mind it’s just the notebooks of one investigator, Greg Mulcaire, but his notes record not only hacking details, payroll and SSI numbers for celebrities, sports men and women, and senior politicians. They also show that the phones of murder victims were hacked, the parents of murdered children, the victims of the 7/7 London Bombing, and the families of soldiers killed in action

And these are the notebooks of just one employee of News International.

The scandal has hit News International’s share price. There are advertising boycotts of News of The World announced by most major advertisers. But the commercial side is but a part of it.

Though Murdoch claims to be a libertarian loving entrepreneur and meritocrat, his whole career as the son of an Australian millionaire has been predicated on using his media pressure to cow politicians, break competition law, and establish market dominance. From his initial courtship of Thatcher (who allowed him to take over The Sunday Times and establish Sky offshore outside regulalation) to his famous kowtowing to the Chinese Communist Party by bumping critical BBC News from his astra satellite, Murdoch has proved himself to an authoritarian loving, monopolist and dynast.

So powerful has Murdoch become in the last 30 years of British cultural life, he has held all politicians in fear and awe. Blair dropped everything to travel around the world and court his favour  in 1995. He was the first CEO to visit (by the back door) David Cameron when he was installed in Number 10 last year. Cameron hired a former editor of NOTW, Andy Caulson, as his press secretary in the lead up to the election (he’s now left the job and probably faces criminal charges). The former NOTW editor and senior executive at the centre of the hacking scandal, Rebekah Brooks (nee Wade) is a close friend of the Prime Minister – see the picture below. She lives a mile away from his Oxford House, and they had Christmas Dinner together this year 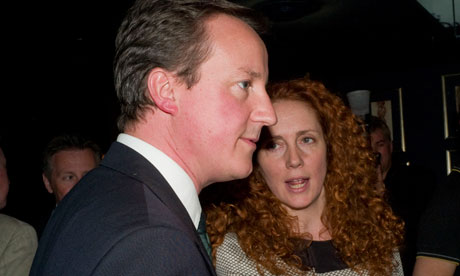 News International and its senior executives have accumulated unrivalled political and commercial power over the last thirty years. Famously known as the 24th member of the Cabinet, Murdoch has managed to affect major legislation in the UK, and his papers distort discussions of issues such as the EU and immigration. Of course many media proprietors have, through the ages, tried to sway policy. But Murdoch was different. He was about to accrue a level of media power in the UK, unheard of in modern times.

And now we know how he did it: through lying to Parliament and the press standards committee, by bugging the phones of innocents and political plays, by gaining access to material illegally, and using it one-sidedly to instil fear and gain traction. A Steve Richards puts it brilliantly in today’s Independent.

But no more. The suspension of the BSkyB takeover would be
an blow to the Murdoch Empire, but the lossof political clout could matter more.

The Labour Leader Ed Miliband was the first to call for the resignation of Rebekah Wade, and it now seems other politicians, long having lived in fear of honey traps and savage media attacks, are now standing up. During yesterday’s emergency debate in Parliament, Tories, Lib Dems and Labour MPs all spoke up about the nefarious techniques and the dubious monopoly Murdoch has built. Despised by the British people for hacking the phones of the dead and their relatives, Murdoch’s attack dogs have lost their bite. People are boycotting their papers, writing to advertisers and regulators in their hundreds of thousands…

And it looks possible that thirty years of shame skullduggery and political corruption from Murdoch and his minions might finally be coming to an end.

UPDATE: In more BREAKING NEWS, the Evening Standard has just announced that News International paid over £100,000 in bribes to police officers and arrests are imminent


The bribes were made to officers in “sensitive” positions in return for confidential information. Sources say several “high-profile” NoW staff and the officers concerned are likely to be arrested within days and that “serious crimes” have been committed.

ACTION UPDATE: You two can do your bit by persuading companies not to advertise at News of the World. As Bumblebums on Dkos notes the current campaign as already persuaded 5 of the top 11 advertisers to quit.

Go to the bottom of the Liberal Conspiracy page and Tweet the remaining Five!

ACTION UPDATE x 2: Since I wrote this it seems the online petition against the takeover has garnered another 30 thousand signatures. It seems you don’t need to be a UK resident or citizen. So SIGN UP! Help them get to 200,000 today!