President Obama Speaks to West Point Graduates … and the Nation

(Transcript below the fold)

This morning, President Obama traveled to West Point to congratulate the newest officers in the United States Army and to reflect on America’s foreign policy agenda. In the President’s remarks, he acknowledged that our world is changing with accelerating speed and that America must be equipped to respond to an increasingly dynamic environment.

The President spent most of his speech outlining his vision for how the United States, and our military, should lead in the years to come. The four elements of American leadership included:


1.   Using military force when our core interests are at stake or our people are threatened

2.   Shifting our counter-terrorism strategy by more effectively partnering with countries where terrorist networks seek a foothold

3.   Continuing to strengthen and enforce international order through evolving our institutions, such as NATO and the United Nations

4.   Supporting democracy and human rights around the globe, not only as a matter of idealism, but one of national security

President Obama articulated that the United States is a global leader – a nation that “must always lead on the world stage.”

"Just because we have the best hammer does not mean that every problem is a nail." -President Obama on U.S. leadership in the world

So it’s happened. Despite protests from the Pentagon, Obama has announced his intention of making the surge of two years ago truly a surge, and to draw down 33,000 US troops from Afghanistan by September next year.


“The Afghan people’s trust in the Afghan army and police is growing every day and preservation of this land is the job of Afghans…. I welcome the decision of the US president today on pulling out [some of] … its troops from Afghanistan and I consider this a right decision for the interest of both countries.”

The news has created an unusual consensus and been welcome by the Taliban’s Islamic Emirate of Afghanistan, as well as NATO, and the governments in London, Paris and Berlin.

Thought it was time for an open thread.

Thanksgiving is over. If you are a political junky then the next month will give you plenty to cheer or moan and groan about.

First up is Afghanistan. I wish I could wave a magic flag and bring the troops home tomorrow. I wish we could find an honorable way out of the region. But, wishes are what you resort to when reality isn’t cooperating. All I can really say about this mess is that I’m glad we have a President who thinks through his decisions even when pressured to do otherwise. Don’t doubt this man’s backbone. Brains and courage. Great combination.

Health care is about to heat up, also. You betcha. The opposition is going to throw everything they’ve got into the gears to try to bring it screeching to a halt. The advantage held by the pro-reform side is razor-thin. It will take supreme effort to see it through to success.

Anything else on your mind?

Not a great week for this vagabond Brit to return to the progressive online community. After three months living out of suitcases, I return to find that everything has fallen apart since I’ve been away.

3. Obama has to confront the reality that the Copenhagen talks on climate change and man made emissions are heading nowhere. 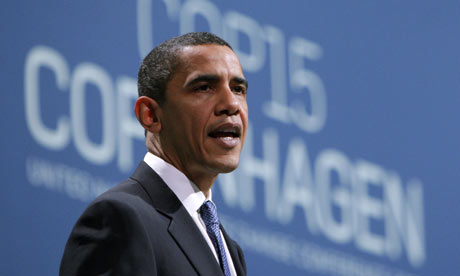 Jeesh. I’ll be careful next time I move. There’s lots to be said about all these things, and having experienced this meme in the British media, I’m sure you’re all getting in the neck too. The line goes like this (I’ve seen it in the Guardian Blog today)…

Karzai sends Women's Rights back to the Stone Age

Two short weeks ago, in a speech on International Women’s Day, President Hamid Karzai gave a rousing speech on the need to fight the specter of the institutionalized marginalization, violence, and rape that Afghani women faced during the reign of the Taliban.

“The forced marriages, the selling of women these are against Islam,” Karzai told some 600 women gathered in a high school auditorium in the capital, Kabul.

How quickly things change. Seems Mr. Karzai’s not so sure he’s got the coalition build to support him in the upcoming Presidential election. So, what’s the answer, here? Why, some very disgusting electioneering- by signing the Shiite Personal Status Law.

A Letter from Helmand

What follows is an edited diary sent to me by a friend, Chris Lincoln Jones, who has spent the last eight months in Helmand Province, Afghanistan. He would have posted this himself, except for communication problems. Hopefully his account will help to inform and inspire debate about Obama’s strategy in Afghanistan.

The good intentions of writing lots of pieces about life here never really survived contact with the enemy; the enemy being a daily diet of office work involving constant writing. Yesterday was rather different, as I have taken on the rather grandiose title of Brigade Patrol Master.

I am looking across Helmand and trying to identify the patterns we set that are subsequently exploited by our enemy when he lays his mines and I try to devise ways to counter his wickedness.

So yesterday I went out on patrol with J Company…