Found on the Internets: Peter Jukes on the British elections

Peter Jukes shared this story about the British election. The mainstream media, which he is a frequent critic of, is livid about their loss of relevance.

Will the Internet Swing this election? Or has the Press just lost it?

In the air war of the British General election, social media was like a hand-held stinger missile against the massed squadrons of the press. […]

Twitter, Facebook, blogs and chat forums are just peer to peer publishing platforms. But compared to the mainstream press, they can perform an immediate crowd-sourced rebuttal unit. Online there are thousands of potential voluntary fact checkers, photographers, spin-meisters, satirists, pundits and witnesses. […]

The main function of social media, therefore, has been in reaction to media coverage. It’s given a voice, that has perhaps long been there, to the vast majority who don’t read the press, or feel television coverage is problematic.

Why Britain Can't Do the Wire

No, this isn’t another piece about Gun Control, or some smirk that our UK murder rate is one fifth of yours because of the absence of guns. By way of apology for my prolonged Moose absence, I’m linking to a piece just published by Prospect Magazine (and causing a bit of a furore on The Guardian) about why British TV drama has declined, in relative quality, compared with the US.

This is a bit of a geeky professional piece about one profession, and with a UK slant. But you’ll know a lot of the programmes I cite, and the more interesting point is about…

Competition, Monopoly, and the role of the state and marketplace in Arts/Entertainment.

It’s no secret that the financial meltdown has hurt London and the UK economy more than most. Our banks have shrunk in value by more than 50 per cent. The City, once rivalling Wall Street, is haemorrhaging jobs and revenue. Our financial sector comprises a much larger part of economy, and as a result, the UK’s recession and indebtedness looks set to continue for longer than the US, and our prospects for recovery seem more remote.

But in the last few days, there does seem to be a genuine scent of warmier sunnier times – and that’s not just this spell of lovely spring weather. It also came from the vast conference centre in London’s docklands which was the base for the G20 summit of developed and emerging economies.

Forget the images of  vandalism from the demonstrations yesterday. I was in the West End last night, and the crowds coming back from the City were peaceful, young, good humoured, singing and laughing, as if they’d just returned from a pop festival. And that’s what most of yesterday was, a political carnival of popular discontent. They begged a question, and begged it loudly, but you’d have to look hard to find a practical answer to the problem.

The solutions were likely to come from further afield….

Even as I write, I can hear the deep throb of more navy helicopters overhead as Obama returns to the American Embassy residence on the edge of Regents Park a couple of miles away.  It’s far too early to get euphoric about the summit, or conclude that the plans will be enough, but listening to the mood music coming from the G20 summit there’s no doubt that the international outlook of President Obama and his new team brought positivity and freshened pace.

Out of politeness perhaps, or in search of a cure for insomnia, I’ve been asked several times to write a diary about current UK politics. That would be great if you’re fascinated by the sight of paint drying, grass growing, or traffic lights changing… 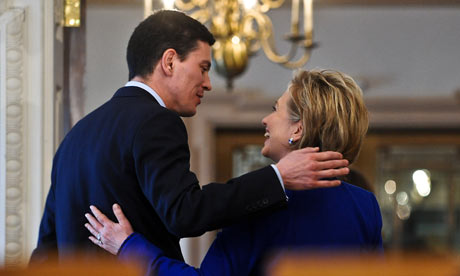 But fortunately yesterday, for her first foreign meeting with a European equivalent, Secretary of State Hillary Clinton chose to meet David Miliband, the fresh-faced UK Foreign Secretary and said.


“It is often said the United States and Britain have enjoyed a special relationship. It is certainly special in my mind and one that has proven very productive,”

For some reason, thanks to these wonderful blogs, I often follow American media and newspapers more than English ones these days. Mostly it’s for the good. But I wonder if this would ever make it onto an American Network.

It’s from Channel 4 News which, along with BBC Newsnight, is the most respected current affairs show on TV. I actually only caught it thanks to the blogosphere. But there’s a big problem here…

How did this Happen? British LGBT Community on the Rise UPDATED

A brief diary inspired by an Andrew Sullivan piece today What Equality Looks Like.


When I came to America from Britain, the gay rights movement was way ahead here of the old country. No longer. Here is a list of the most powerful openly gay people in Britain. The whole list is a staggering contrast with the US.

This is partly a diary to celebrate the survival of the Moose over the dangerous last few months while Sarah Palin was circling in a helicopter with her telescopic rifle, and also a summary of a talk I will be doing on Thursday November 20th, at a plenary session that will start at about 10 a.m EST and last for an hour and a half.

The Conference is called No Frontiers? Free Speech and the Internet and is hosted by English PEN, the 21st Century Trust, and is being covered by The Guardian in its Comment is Free section. My specific talk is: Crashing The Sweetiegate – how online forums and political advocacy could transform the political sphere

For my fellow Moosers, the title (suggested by the organisers) is self explanatory, and some of you will be familiar with basic argument from my Flaming for Obama piece in Prospect Magazine last month, which drew an unexpectedly benign response from the proprietor of MYDD.

But here I’m inviting you all to show how the liberal blogosphere works, and respond in real time, or whatever time you choose, to the basic points with critiques, thoughts, flames or fail cartoons.

Words are all I have. As a British citizen I cannot vote in this election. I cannot phone canvass. I cannot donate. All I have are words. But  after this amazing  campaign and all the words we’ve all expended, I just want to release two more crucial words into the blogosphere: thank you.

Thank you for the flames and mojos, criticisms and kudos: thank you for the fail pictures and the poll analysis, for the LOLZ cats and live blogging threads. But above all thank you for your tolerating me here. As a foreigner in these virtual forums I’ve experienced the best of American hospitality, just as my son has experienced it during the last few days in Pennsylvania, organising, canvassing, getting out the vote.

Thank you. These are just words.  But I cannot vote or donate. Words are all I have.

Words were all I had four years ago when I first became actively engaged in your debates. I had my reasons for being so caught up in the last election, but I was mainly a lurker. But nearly exactly four years ago, on November the fourth 2004, just after the savage and dispiriting defeat, I wrote my first ever diary on a blog to thank Democrats, even in defeat, for providing such inspiration and passion and hard work.

On that terrible day in November 4th 2004, I also tried to write some words of consolation. I don’t know how much they helped. I drew analogies from the Labour Party’s three successive defeats and 18 years in the wilderness, to encourage you all to rebuild and regroup.

A few days ago I took a look at that diary for the first time in four years and I was stunned to find this:

The Strange Death and Resurrection of Identity Politics

“She’s Dynamite!” Or so thought Morton C. Blackwell, President Ronald Reagan’s liaison to the conservative movement, even though he couldn’t get closer than four feet from Sarah Palin at a Virginia fundraising dinner. Whatever has got into the right wing base of the Republican party, it’s pretty fundamental, and they are not alone in seeing Palin as the future of the party, win or lose

Governor Palin sees herself this way too.

The shocked silence of the McCain spokesman was a result of this segment of an interview recorded on ABC.

VARGAS: But the point being that you haven’t been so bruised by some of the double standard, the sexism on the campaign trail, to say, “I’ve had it. I’m going back to Alaska.”

PALIN: Absolutely not. I think that, if I were to give up and wave a white flag of surrender against some of the political shots that we’ve taken, that … that would … bring this whole … I’m not doin’ this for naught.

As far as I know this is unprecedented – an et tu Brute moment as the VP choice stabs the man who chose her in the back.

Palin is explosive all right. For the Republican party she’s a volatile mixture of glitz, folksy charm, utter ruthlessness and willing ignorance.

But it’s the ‘sexism’ part of that exchange I want to focus on, and what this means for the prematurely announced death of identity politics.